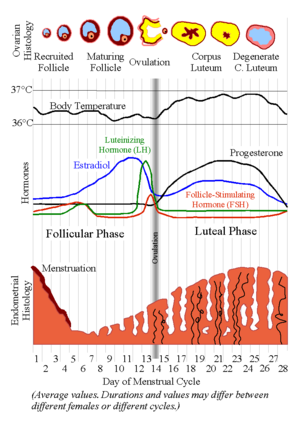 The truth is that there are many influences into a woman’s cycle each month. The key to understanding it will mean she will have to get to know her body, not the bodies of others. A woman can chart and learn about her cycle to see whether her body is reacting normally to all the influences in her life. This will enable her to see not only when she is fertile or not, but also to see if there is a problem that needs to be seen by her doctor.

Many of us were either not told or made to feel that the beginning of our menstrual cycles was something to feel dirty or secretive about. Very few girls are ever told the biology behind their periods. They are not told about what it means and how to figure it out and keep track of it.

One of the first facts that all women should know is that all baby girls are born with all the eggs they will ever have in their lifetime. Unlike boys who do not start producing sperm until puberty, girls have all they will before birth. Over half of what you are born with will die off before puberty. While only one to two eggs are ever released in each cycle, a woman starts each cycle off with over 16 eggs in circulation. As she grows older this count will slow down and eventually she will run out of eggs and enter menopause.

It is a myth that a woman only uses one egg per cycle. She will start each cycle with up to 30 follicles. Each follicle contains an egg. Only one or two of the eggs will actually take over during a cycle and mature. Therefore, even though a girl baby can be born with as many as 450,000 eggs, she could only have less than 225,000 by the onset of puberty and will be using up to 30 of them each 25-40 days until she runs out. This means a normal woman will run out of eggs long before she runs out of years.

There is an actual biological pathway to how we are fertile. It actually begins with the brain, not our reproductive organs. There is a place of the brain called the hypothalamus. This place regulates many body functions like when we want to eat, drink, desire sleep, want to have sex, and other hormonal or endocrine functions. The role in releasing an egg begins with the release of FSH-RF – follicle stimulating hormone releasing factor. This hormone tells another part of the brain – the pituitary gland – to start releasing FSH – follicle stimulating hormone. This starts the beginning of egg production. Many follicles that each contain one egg each, are stimulated from this chemical reaction.

The follicles respond to this FSH by making estrogen. In the ideal endocrine world the follicles will release more and more estrogen. This will thicken the uterine lining and make the mucus in the cervix change. As the estrogen in the blood increases, it tells the hypothalamus a message. It says that there are one or two dominant follicles that are ready. When it peaks it tells the hypothalamus releases LH-RF – luteinizing hormone releasing factor. This tells the pituitary gland to release LH – luteinizing hormone – that makes the biggest follicle (those over 18 mm) mature and release in what is known as ovulation.

The Real Happening in Ovulation

The releasing of an egg is more than just when you can get pregnant. When the time approaches, it is known as your fertility window. During this time the blood supply to your ovaries increases. This will allow the ovaries to get more estrogen and other hormones that will allow follicle growth and then lead up to the point of ovulation. You will probably notice some cramping during this time as the ligaments supporting the ovaries pull each one closer to their tube. Between each fallopian tube and ovary is a space. This space can keep an egg from reaching the uterus if the space is too far and the egg cannot find its way into the tube where the sperm is waiting to fertilize it.

The cervix will also begin to secrete more mucus. It will be thinner and more abundant. This helps the sperm live long enough to get into the uterus. Many women will use a monitor such as Ovatel to help them figure out and confirm this fertile window. A woman will know for sure that ovulation has taken place by her temperature first thing in the morning – called basal body temperature. If her temperature stays higher than 0.4 degree for at least 3 days, it confirms that ovulation has occurred.

Changes in the Uterus

From the time of ovulation until your next period – or finding out you are pregnant – your body will begin preparing for a fertilized egg to make its way into the uterus. Once ovulation has occurred the spot it came from will turn into a corpus luteum or yellow cyst. It makes high amounts of progesterone and low amounts of estrogen. The progesterone helps to build the lining thicker and make it sticky. This sticky substance will catch the egg as it rolls out of the tube and into the uterine cavity. This stops the egg from rolling so it can implant.

If the egg is fertilized and implants into the uterus, the corpus luteum will continue to make more and more estrogen and progesterone. It knows that there is an embryo present because the implanting egg starts to make hCG, the hormone a woman tests for in pregnancy. The more hCG that is made by the embryo, the more female hormones that are made by the ovaries to sustain the pregnancy until the placenta takes over between 8-12 weeks.

If the egg does not become fertilized or cannot implant, then there will be no hCG to tell the ovaries to keep up Progesterone production. The corpus luteum will shrink and heal. Once it has done this the progesterone drops and the lining of the uterus begins to break down. This is when menstruation occurs and the cycle begins all over again.

There are many myths that surround a woman’s menstrual cycle. The truth is that every woman is so different that what is normal for one woman may not be the same for another. As long as your cycles are consistent and are not changing, then they are normal for you.

While most women have cycles that range between 26-30 days, it is considered normal to have cycles that range from 24-40 days. As long as your cycles stay roughly the same length for the most part, there is nothing to worry about. If you begin to see that your cycles are varying in length with no real consistency, then there could be an underlying issue. Menstrual charting using a chart like MyCycleDiary can help you to keep track of your cycles in case they begin to change over time.

One of the largest menstrual cycle myths is that each woman releases her egg on the 14th day of her cycle. The fact is that a woman ovulates 14-16 days before her next period. The first half of a woman’s cycle is where she is making the egg and can vary in length. The second half of a woman’s cycle stays the same and is about 14 days.